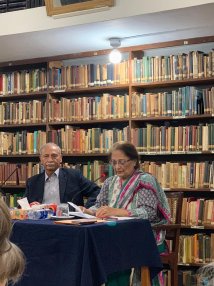 On Saturday, July 20, 2019, former Federal Secretary, Inspector General of Police and Director General FIA, Mr. Tariq Khosa, visited The Pakistan Institute of International Affairs, where he addressed the members of the Institute on Internal Security and Governance Challenges confronting Pakistan. He started his speech by explaining that he does not have any political affiliations or any personal agenda. He expressly stated that his lecture did not intend to offend any segment of society. While discussing terrorism and internal security challenges he focused on three ‘Ms’, (i) Mullah; by which he meant religious extremists, who by design deliberately promote a mindset that proliferates violence, (ii) Military; who he said are the big part of the problem, yet they are a bigger solution to those issues, and (iii) Militants, in shape of non-state actors who have eroded the authority of the state. He spoke about the Karachi Operation which started under the command of the Karachi police force, with the support of Intelligence Bureau, in September 2013.

He explained that since 2013, terrorist incidents in Karachi have declined by 70%. Subsequently, 373 terrorists were killed and 521 were arrested from 2015 till 2018. Unfortunately, the police faced the major brunt of this operation, with a total of 450 police officers who were martyred, 163 in 2013 which reduced to 6 in 2018. Mr. Khosa recounted that it was not the Pulwama Incident which made us change our strategy on the use of non-state actors, but that the decision was taken along with the present government in January 2019, emphasizing that there would not be any non-state actor in the future. However, the efficiency of this policy is yet to be seen. He further explained how the Police Reforms were constituted by the Supreme Court, in a committee of serving IGs as well as nine retired IGs who had served in all the provinces and have come up with a seven-point agenda to reform governance issues.

The reforms gave priority to the concerns of the public against the police. Hence, in 116 districts of the country the police have complaint mechanisms, with the Sindh police mechanism being the most efficient. On Friday, July 19 2019, a briefing was given by the all serving IG’s to the Chief Justice, in which stats of the last two months show that there have been 77,000 complaints that were redressed out of which 57000 were redressed to the satisfaction of the police. This is a huge success for the police, otherwise these cases go to the courts. This improvement allowed 11% reduction in the number of people who go to courts and allowed another 20% reduction in the matters against police going to high court. The new task is improvement of police investigators.

Upon talking about the case of national security he reminded the audience of Pakistan’s national objective which was based upon pursuing social justice through peace and security, as stated by the country’s founding father Muhammad Ali Jinnah. However, Mr. Khosa said that we have lost sight of our national purpose and have ended up becoming a national security state, which will always dominate at the expense of human security and development. Following these concerns, he said that Pakistan does not have a national security policy. Hence, he proposed six points on national security agenda:

When answering one of the questions, Mr. Khosa made points regarding the Balochistan Liberation Army (BLA) and the Baloch Republic Army (BRA) stating that their power has broken-down as their leaders fled abroad to London and Geneva. The power has now shifted from the sardars and the main stake holders of Balochistan to the middle-class youth who are now being approached and brought forth by the state to the negotiating table.

When he was asked to elaborate on the The Pashtun Tahafuz Movement (PTM), he said that it is a grassroots movement that was mishandled by the state. The movement has genuine concerns but there is a small faction in the PTM that wants to resort to violence and the state has the right to deal with those who challenge the writ of the state.

When questioned about the Kulbhushan case, Mr. Khosa claimed that Pakistan and India have been issued a balanced verdict. He emphasised on how there should be a mature dialogue through backdoor diplomacy.

He concluded by reiterating that the National Security Parliamentary Committee should be activated and how now is the time to repent for our mistakes and to move forward. He believes in a better future for Pakistan and is hopeful.