A Conversation on the Current State of US-Pakistan Relations

Trump is actually a new face, not a new factor on US outlook on Pakistan 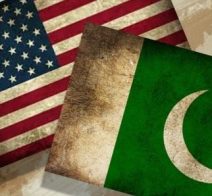 From Dawn by Peerzada Salman. Two eminent speakers on Thursday shed light on the current state of Pak-US relations at The Pakistan Institute of International Affairs (PIIA). The first speaker was Najmuddin Sheikh, former foreign secretary of Pakistan. He started his talk by mentioning a few myths that prevailed. He said there was the myth that Pakistan and the United States had mutual interests. It had never been the case. The ties were of a transactional nature from the beginning and the commonalities were contrived. We did not have a common aversion to the Soviet Union. During the Afghan jihad we were genuinely concerned about the Soviet Union consolidating its position in Afghanistan, the old idea that it was looking for warm waters, but the Americans had a different idea; they said they would do to the Soviet Union what it did to them in Vietnam. The only commonality was the war against terror.

Mr Sheikh then pointed out the errors that the US committed. He said: “Why did the US allow Osama bin Laden get shifted from Sudan to Afghanistan?” He [Osama] travelled by a C130 from Sudan to Afghanistan. In Sudan he was a relatively unknown figure whereas in Afghanistan he was a hero of the Afghan jihad. Two years later an American general sitting in the office of our chief of army staff said they were firing missiles across our air space but they were not meant for us; they were trying to hit a camp in Afghanistan where they believed Osama bin Laden was. Mr Sheikh said the current situation was that President Trump’s New Year tweet generated a lot of speculation and he [Sheikh] thought there was a more rational explanation for it. END_OF_DOCUMENT_TOKEN_TO_BE_REPLACED

Despite a furious response from the Pakistani media, the foreign office and ISPR have responded sensibly to the situation.

Trump is a total racist who thinks that black people from “shithole countries” such as poor Haiti are unworthy of the superior status he bestows upon white people from Norway. But of course he went on to quickly deny he said that at all. Michael Wolff’s book Fire and Fury confirms that Trump is an infantile person and his administration knows that he is an 11 year old. Psychoanalytic studies suggest that human beings always need an external object to put all the blames on him for their own misdeeds. We create an external enemy of ‘flesh and blood’ that can be fought and can be avenged. In other words, we imagine that our failures are not because of our own misdeeds but because of some other external forces. Such use of imagination helps us to come out of our inner sorrow by blaming some external enemy who is falsely thought to be the reason for our own failures. After all, states are run by human beings not stones. Indeed, states are often in ‘denial’ about accepting reality and the US is no different in that resect.

A recent tweet by Donald Trump blamed Pakistan and argued that ‘The United States has foolishly given Pakistan more than 33 billion dollars in aid over the last 15 years, and they have given us nothing but lies & deceit, thinking of our leaders as fools. They give safe haven to the terrorists we hunt in Afghanistan, with little help. No more!’ Mounting tensions have led Pakistan to react by halting intelligence sharing with the US after losing American military aid. Instead, Islamabad will turn to its ‘time tested friend’ and ‘reliable ally’ Beijing. In October 2017, the same Trump was found praising Pakistan for its cooperation in rescuing a North-American family from the Taliban. However, now, Trump has accused Pakistan of giving safe haven to the terrorists that Americans hunt in Afghanistan. END_OF_DOCUMENT_TOKEN_TO_BE_REPLACED