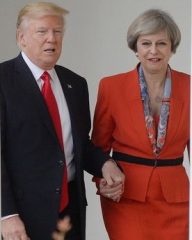 Immigration crackdowns are a commonly used political ploy in western countries but president Trump has infamously institutionalised Islamophobia by banning Muslims from Iran, Iraq, Libya, Somalia, Sudan, Syria and Yemen from entering the US. Sir Mo Farah, the Somali born British super-athlete denounced the American president by saying that the “Queen made me a knight, Donald Trump made me an alien”. Kim Kardashian highlighted that more Americans die falling out of bed annually (737) rather than those killed by jihadists (2). Theresa May “does not agree” with the Muslim ban. The vicar’s daughter also claims that the UK will not sleepwalk into America’s dirty wars. But the tough talking prime minister, decked out in her trendy clothes and bright red nail polish, could not resist his charms and held hands with him as they walked down a tricky slope in the White House to show off their “special relationship”. But since he wants to make a fantastic success of Brexit – which he calls a “wonderful thing” – how could she resist?

The recent UK Supreme Court decision that she cannot unilaterally trigger Article 50 of the Lisbon Treaty and bypass Parliament has not gotten her off to a flying start. Her new best friend’s Muslim ban has also suffered a blow at the hands of a federal judge in New York. British foreign secretary Boris Johnson branded the ban “divisive and wrong” and there is public pressure to cancel Trump’s state visit to the UK later this year. According to the New York Times, “it would take massive effort to create a trade deal if even minimal effect” and of course no deal is legal until the UK remains in the EU. END_OF_DOCUMENT_TOKEN_TO_BE_REPLACED