of an innocent fledging little bird

how easily scared you are

the softness of the clouds

the refreshing spray of cold water

how easily scared you are

You can kill one Parween

but you cannot kill

the power of an idea END_OF_DOCUMENT_TOKEN_TO_BE_REPLACED

Parween Rahman: The Legend Lives On

Slender, almost frail, with her hair down to her waist, her captivating smile and melodious voice, Parween Rahman was a legend in her lifetime. An assailant’s bullets took her life on Wednesday 13 March, 2013 as she was being driven home from work. The target killer snuffed out her life but the legend that she was will live forever. She was 56 years old.

Parween’s father hailed from Patna and her mother hails from Hyderabad Deccan. Her parents’ families moved to East Pakistan (then East Bengal) after the Partition. During the upheaval leading to the creation of Bangladesh, Parween’s family suffered immensely, as some of its members got separated from one another. They finally moved to present day Pakistan and Parween studied to become an architect at Dawood College of Engineering and Technology. She also obtained a post graduate diploma in housing, building and urban planning from the Institute of Housing Studies in Rotterdam. END_OF_DOCUMENT_TOKEN_TO_BE_REPLACED

Women’s Learning Partnership Film: Because Our Cause Is Just

The wave of Arab revolts that started in Tunisia in December 2010 and then spread throughout the region, were initially ignited by civil movements for rights, justice, and dignity.  Women human rights defenders and democracy activists were at the heart of peaceful movements for change in the streets of Arab countries. In fact, their presence, determination, and demands were grounded in their struggles against dictators over the past few decades. Watch film here or view via the embedded link below.

It was a great day for Aurat Foundation. Not only because 8 March was International Women’s Day but also because the Sindh Assembly unanimously passed long-awaited legislation against domestic violence. In its dying days, the Assembly adopted the Domestic Violence (Prevention and Protection) Bill 2013. This much needed legislation, defines domestic violence as: 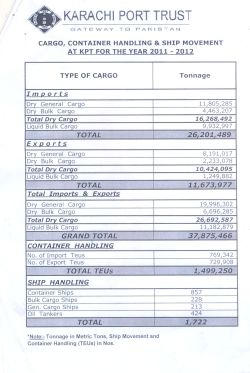 There is ample scope of enhancing the operational activities of the Karachi port and it is incumbent upon the port authorities, the port operators, and the port users to ensure that this major port of Pakistan is operating at its optimum. Pakistan’s imports and exports have increased substantially in the past few years. This has led to a dynamic enhancement in activities at both the Karachi port as well as Port Qasim. END_OF_DOCUMENT_TOKEN_TO_BE_REPLACED