Let some intellectual contribution on Kashmir be generated from Karachi 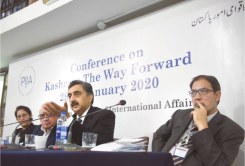 The pre-lunch session on the second and final day (Thursday) of the conference on Kashmir organised by The Pakistan Institute of International Affairs (PIIA) proved to be an extremely engaging one. Eminent journalist and human rights activist I.A. Rehman, who presided over the session, said if issues were left [like that], they became permanent. In his view, Kashmir is primarily a humanitarian issue. Kashmir today was one of the most magnificent and marvellous struggles for self-determination. We should salute the spirit of freedom that had inspired people [in Kashmir]. It’s the issue of Kashmiris, not of India or Pakistan. Pakistan at best was their counsel. Mr Rehman said the abrogation of Article 370 of the Indian constitution was not a sudden thing. Modi and his party had announced that they’re going to do that much earlier. Did we listen to them? We reacted only when it had been done. “We must remember that it is the will of the Kashmiri people that we have to defend.”

Mr Rehman said we were repeating our arguments to ourselves. “Have we examined India’s arguments? More importantly, have we examined what the other countries are saying?” In order to understand the situation we must realise that today in Kashmir there’s a national struggle for self-determination. It’s a national struggle and we shouldn’t communalise it. “How many delegations have we sent to countries which are opposing us? It’s a long haul. It’s not going to be solved tomorrow or the day after tomorrow. We should be patient.” Mr Rehman asked, with reference to the talk about President Donald Trump’s offer to mediate between Indian and Pakistan, whether Trump had commented on Article 370. “Has Mr Trump taken a position on what India has been doing? He would only tell you baba jo ho gaya woh theek ho gaya.” It’s not a matter which would be resolved emotionally. Let’s not give juvenile responses, he argued. END_OF_DOCUMENT_TOKEN_TO_BE_REPLACED

There has been no fundamental change in India’s attitude towards Pakistan. It has never seriously engaged with Pakistan on conflict resolution.

This was one of the points made by Riaz Khokhar, former Ambassador and Foreign Secretary of Pakistan, on 29 January 2020 in his keynote address in the inaugural session of a two-day conference on ‘Kashmir, the Way Forward’, organised by The Pakistan Institute of International Affairs (PIIA). Mr Khokhar started his speech by saying that the subject could not be looked at in isolation because it involved a number of factors: the situation in South Asia in the geopolitical and economic context, the world order was in flux, the rise of China, Russia reasserting itself, the US still believing in its superiority as an exceptional power, the US-India strategic partnership and flashpoints such as Afghanistan and the Middle East. He rejected the notion that the Pakistan government was caught napping when Modi made his move [in Kashmir]. “We were following his election very carefully, and there was a genuine understanding that if he was to return with a massive majority then we should expect him to do things. The Pakistani government did handle the first phase of the problem coolly.” Watch Video

Mr Khokhar said in order to analyse the situation we needed to see what Modi did: he basically abolished articles 370 and 35(A). And why at this time? There were several reasons, he argued. First, as the leader of the BJP and a deeply committed RSS man, he was committed to the concept of Hindutva. Secondly, he was convinced that if he did that, it would be a popular move [among Hindus]. Thirdly, he was convinced that the international community was not with Pakistan. Fourth, after the February 2019 skirmish he was convinced that Pakistan was not entirely strong –– he saw it politically fractured, economically weak, but militarily strong. He also realised that Pakistan was financially in a difficult situation; if there was a war we would have difficulty in financing it. END_OF_DOCUMENT_TOKEN_TO_BE_REPLACED

Iran crisis: ‘General Soleimani was on a peace mission’

After 1979, Iran created its own democratic brand of Islam … The major conflict is between Iran and Israel.

We at The Pakistan Inst­itute of International Affairs (PIIA) held a session on Saturday evening on the current developments in West Asia participated by three prominent individuals. Former foreign secretary of Pakistan Najmuddin Shaikh was the first speaker. Mr Shaikh began his presentation by mentioning the Ukrainian passenger plane that was mistakenly shot down by an Iranian-launched missile. Iran has acknowledged that this happened because of a mistake on the part of those who are involved in safeguarding Iran, and those who have fired the missile will be held accountable. There will be a demand for compensation. Perhaps a precedent will be followed when in 1988 an Iranian passenger plane was shot down by the US. President Reagan had expressed his regret and eventually the Americans decided that compensation would be given. Mr Shaikh said three countries are associated with the current developments: the US, Iran and Iraq. There is much confusion in the United States.

There is polarisation in the country, and within its administration. The Congress says that the authority of waging war lies with it and Trump will ignore it. Trump is unpredictable but one thing is not: anything that Obama did is [deemed] bad and has to be reversed. However, there is a deeper concern. The American secret state is still traumatised by the hostage crisis. It is driving the attitude towards Iran. Many think-tanks have written about how counterproductive it is. This is not the prevailing sentiment, though. The prevailing sentiment is that what happened to Qassem Soleimani is right but now we need to de-escalate. With reference to Iran, he said it did a wise thing of announcing that we have carried out our attack and that’s all we’re going to do. But they sent a message to the US that it should examine the precision of their missiles. END_OF_DOCUMENT_TOKEN_TO_BE_REPLACED

The Rohingya and the Responsibility to Protect: Failing an Oppressed Minority

Claiming the lives of hundreds of thousands and leaving many more stateless, the Rohingya crisis has harrowed the world since 2015.

The Rohingya community has been denied the right to citizenship since 1982 by Myanmar authorities and has been subjected to several government-led oppression schemes (Bhatia, 2018). The end of military rule and the arrival of a softer government in Myanmar was expected to be a turning point for the decades-long structural hostility. However, the latest wave of massive ethnocide against the Muslim minority in the Rakhine state has set a benchmark of unprecedented human rights violations in modern history. The onset of this recent state-perpetrated violence has by far resulted in the mass exodus of over 740,000 Rohingya refugees into neighbouring Bangladesh. Mostly settled in the Cox’s Bazar, 33% of the refugees live below the poverty line, vulnerable to climatic factors such as monsoon downpour and floods. The United Nations has repeatedly condemned the systemic discrimination and violence against the religious and ethnic minority. However, Myanmar has termed the operation as a legitimate counterinsurgency, imperative for the prevalence of peace in the country.

Although the international community concedes the presence of ‘genocidal intent’ in the military crackdown launched by Myanmar’s armed forces, no substantial action has been taken that might prevent the consequences of the ‘clearance operation’. The UN doctrine, Responsibility to Protect, was adopted by all member states in 2005, according to which the primary responsibility for the protection of the masses rests with the state in which they reside. Nevertheless, a ‘residual responsibility’ lies on the community states, in case the primary state cannot safeguard the rights of its people or is itself involved in systemic atrocities. The community states after the authorization of the UN Security Council have the right to intervene to prevent the organized genocide or war crimes . The most recent implementation of the doctrine was seen in 2011 in Libya when the world powers collectively brought down an authoritarian ruler. END_OF_DOCUMENT_TOKEN_TO_BE_REPLACED