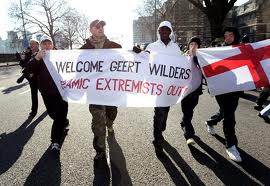 The forces opposing immigrants and Islam in Europe go hand in hand: elections and the politics of division have served such forces well. In advancing their political agenda, the elites of the continent dislike Muslim immigrants, hate Halaal meat and remain fixated on Islamic fundamentalism. Extremists such as Anders Behring Breivik killed his own people because he felt that the Labour Party was too relaxed about  Muslim immigration into Norway. It became the reason that he massacred them on July 2011 in Utoya. Moreover, the spectacular success of the French far-right party, The National Front, in 2012 French presidential election demonstrate the alarming shift of Europe’s politics from traditional liberalism to more radical extremism, cultural intolerance and more importantly, accepting Muslim integration into the European mainstream.

Britain’s far-right, the British Freedom Party has a clearly adopted anti-Islamic policy which it manifests as its ideology. END_OF_DOCUMENT_TOKEN_TO_BE_REPLACED