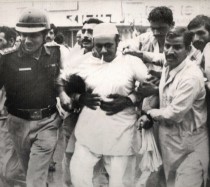 Our event ‘Fatehyab’s City: Causes and Repercussions of Turmoil in Karachi’ was the topic of the fourth lecture in memory of the late president of the independent Mazdoor Kissan Party Fatehyab Ali Khan, on the occasion of his ninth death anniversary, delivered by architect and town planner Arif Hasan at The Pakistan Institute of International Affairs (PIIA) here on Thursday. Beginning his lecture by paying tribute to Fatehyab Ali Khan, Arif Hasan said that they met as often as twice a week to discuss the issues faced by Pakistan. “Fatehyab was passionate in his arguments. He had leanings towards the Left but was not a Communist. And he was a product of Karachi’s city life,” he said. Arif Hasan said that Fatehyab’s political activism started from student days. In university, he and his colleagues were often sent to prison where they also received beatings. They were a popular group of students who had been barred from entering the city, but they carried on with their activism and opposing Ayub Khan’s government.

“In the 1990s, Fatehyab took a stand on talks of separation of Karachi from Sindh as he strongly believed that Karachi was very much a part of Sindh,” he said. He said that Fatehyab came to Karachi in 1949 as a 13 or 14-year-old from Bombay. “Political opportunism was changing the demography of Karachi,” he said. At first, there was a huge population of Sindhi, Baloch and Brahvi people in Karachi with a few Urdu-speaking people, and even fewer Punjabi-speaking folks with hardly any Pashto-speakers around as Hindus outnumbered Muslims. “But by 1951 the population of the Sindhi, Balochi and Brahvi people dropped as Urdu-speaking people increased in numbers. The Hindus decreased from making up 51 per cent of the population to two per cent and Muslims who were 42pc made up 90pc of the city. “Those who came to settle here are powerful. Their politics are subtle. They control a lot of resources,” he said, adding that Karachi is different from the other populated cities of the country. END_OF_DOCUMENT_TOKEN_TO_BE_REPLACED