‘Endgame in the Middle East’: A Talk by Ambassador Karamatullah Khan Ghori

Israel does not want to see Assad go because he never posed a threat to Israel. So the Americans are happy; and the crisis is not ending anytime soon says former Pakistan diplomat 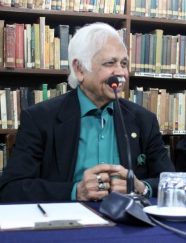 The Syrian crisis is not going to end anytime soon. When it does end, it will not be to the liking of the West. This was said by former ambassador Karamatullah Khan Ghori in his lecture on ‘Endgame in the Middle East’ organised at The Pakistan Institute of International Affairs (PIIA) on Tuesday. Mr Ghori said to understand the subject, one needed to look at the genesis of the game. It was in 1908 when oil was discovered in the Middle East for the first time at a place called Masjid-i-Suleiman in Iran. Five years later, it was discovered in Iraq, a year later in Bahrain and Saudi Arabia was the last country tapped by the oil explorers. Notably, the discovery of oil preceded the First World War. It also coincided with Western infatuation with Israel. Although the so-called Balfour Declaration was announced in 1917, the spadework for a Jewish homeland had started in the last decade of the 19th century when the Zionist International was founded in Switzerland. The two developments almost happened simultaneously.

For the last one hundred years, this has been the prime goal and two-edged weapon of the West against the Arab world: one, oil continues to be supplied to Western economies; two, Israel is not threatened. Mr Ghori said in 1973 the Organisation of Petroleum Exporting Countries (Opec) imposed its first oil embargo against the West, and its architect was Saudi Arabia’s King Faisal. That embargo gave birth to what is now known as the Kissinger doctrine. Henry Kissinger was the secretary of state in 1973. He said, “We cannot allow this blackmail of our economies to go unchallenged. If it is allowed to go unchallenged, it will choke our economies. Therefore, we should be prepared to land our troops on the oil producing fields of Arabia.” Mr Ghori said colonialism relied upon creating local surrogates, and in the global context, regional surrogates. The US, after WWII, created regional surrogates in the Arab world and the Persian side of the Gulf.

The Shah of Iran was their main policeman in that part of the globe. The other side was Saudi Arabia with which the US entered into a compact in the closing days of WWII. A meeting took place aboard USS Quincy between President Roosevelt and the king of Saudi Arabia where they entered into a compact saying you [Saudi Arabia] ensure that oil supply lines won’t be threatened and we [US] ensure that Aal-i-Saud would continue to rule over the Arabian Peninsula. So the embargo placed by Opec in 1973 had threatened the entire plan of the West.

Kissinger, in order to carry on with the plan, hit upon a formula, the doctrine that those who were against American interests must be “picked up”. The first target was the most powerful country, Egypt. Anwar Sadat was persuaded to enter into a peace deal with Israel. That left two other countries which could pose a threat to Israel – Iraq and Syria.

Mr Ghori said it was to the fortune of the West that both Iraq and Syria were ruled by dictators, though both were sworn enemies of each other. Then something happened that Kissinger had never visualised: the Iranian Revolution of 1979. Iraq’s Saddam Hussein was persuaded to invade Iran. But he got entangled in Iran for eight long years. In the meantime, the Americans continued to choose their friends in the Arab world. Egypt had been neutralised. The Sheikhs of the Gulf were always friendly. Iraq got involved in a war, and then its occupation of Kuwait, which led the Americans to come to the rescue of Kuwait.

As a result, in 1990 American troops landed in Saudi Arabia [something that Kissinger had talked about]. Saddam was defeated in the first Gulf War.

Mr Ghori said subsequently, another kind of engineering began. The Kurdish areas were virtually detached from Baghdad. Saddam’s rule didn’t function over the Kurdish land. On the other hand, Kurdish forces were being trained by Israeli military experts.

In 2003, George W. Bush found it easy to invade Iraq on the lie that the country was in possession of WMDs, which were never found. They could not create an independent Kurdistan because Turkey did not want it.

Mr Ghori said all of it left only one country in the Arab world which could cause problems to Israel, and that was Syria. The Syrian crisis started in the footsteps of the Arab Spring. It triggered a series of crises and provided opportunities to those who had a bone to pick with Syria for one reason or another. There are a few factions involved. One, the Syrian people who opposed the autocratic regime of Bashar al Assad. The second faction was created by those Arab sheikhs who didn’t like Syria’s alliance with Iran (bringing sectarian feeling into play).

The sheikhs saw in the Syrian crisis the chance to see the back of the ruling Assad family. They supplied arms to religious brigades to rise against the regime.

Then the nonreligious secular faction of Sunnis known as the Defence Forces of Syrian People against Assad also got together. And the fourth and last faction was that of ISIS. These four started fighting among themselves. Later, the Russians and Iranians got the upper hand in fighting. Today, except a small area closer to the Turkish border, much of the country has been wrested back by the Assad regime from the rebels.

Mr Ghori said the US wanted the Syrian Kurds to rise against Assad, but activation of the Kurds invited Turkish backlash. When Americans started supporting the Kurds, it went against the Turks. The Turks told their Nato allies that their effort to topple Assad would go against Turkey’s interest.

Mr Ghori concluded that currently we are at a stage where no one can predict which way the wind will blow in Syria. It looks like the outcome will not be to the liking of the US.

Israel does not want to see Assad go because he never posed a threat to Israel. So the Americans are happy; and the crisis is not ending anytime soon.