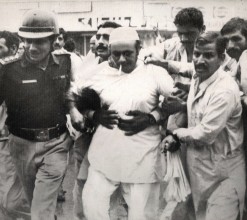 Dr Masuma’s speech at Federal Urdu University, 30 September 2015, as delivered: Mr Raza Rabbani, Dr Pirzada Qasim, Dr Suleiman Muhammed, members of the audience. Some friends had suggested that this meeting and debate to honour the memory of Fatehyab Ali Khan should be held, as it was held last year, in the University of Karachi. But Fatehyab was not only the first elected president of the Karachi University Students’ Union, he was also president of the Inter-Collegiate Body, so he represented the entire student community. Therefore, it was in the fitness of things that the Vice Chancellor decided to hold this event in the Federal Urdu University. Here, I want to praise Asif Rafique and the members of his team who have arranged this event with so much devotion and care. My association with Fatehyab lasted for 50 years ─ first as students in Karachi University and later during our marriage. In politics, there were very few who matched his integrity and honesty of purpose. Since his youth, he was in the forefront of every democratic movement in our country.

During his political career, he made numerous sacrifices, was persecuted and subjected to many deprivations. He faced trials and convictions by military courts, long prison terms and externments but never compromised on his political principles. He was fearless and never yielded to political threats or pressure of any kind and he had that remarkable courage to refuse which is found in few people. He never changed his political party. He joined the Pakistan Workers Party and when it merged with the Pakistan Mazdoor Kissan Party, he remained its president until he passed away in 2010. Fatehyab was a people’s hero, a brilliant orator, and he wrote extensively on constitutional, political and contemporary issues. During the Movement for Restoration of Democracy, which was launched against Ziaul Haq’s dictatorship, he made his greatest contribution to politics. That decade saw the most relentless persecution of Fatehyab and all those who were fighting for democracy and the rule of law.

A consensus builder, he tried to bring all like-minded political parties on one platform so that, together, they should work against dictatorship and establish a democratic order in Pakistan. He always championed the supremacy of the 1973 Constitution, both from political platforms and in the courts of law.

In his personal life, Fatehyab was remarkably free of prejudice ─ religious, sectarian or social. Yes, he was prejudiced in favour of his political ideology. He used to smile and say that he was a nazaryati person. He was extremely cultured and soft spoken ─ even when he opposed somebody, he did so with utmost grace. There were no temptations in his life ─ not for power, pelf, authority, property or money. He was completely immune to such temptations.

What is the message of this meeting today? We must ask ourselves this question. We should not forget that if we see any institutional autonomy, emerging democratic values, some freedom of thought and expression, it is the result of the struggle waged by Fatehyab, his colleagues, and countless political workers whose names have faded from our memory. The young people of this generation cannot, perhaps, even begin to comprehend, how difficult and cruel that struggle was.

The quatrain you see on the screen behind you, was written by the late Habib Jalib for Fatehyab and his externed colleagues ─

About politics in Pakistan, he often recited this couplet by Mohsin Bhopali:

But perhaps that is not true, because this large gathering testifies to the fact that true recognition belongs to those whose sacrifice and devotion we are celebrating today.

In spite of the trials and tribulations which he faced during his lifetime, Fatehyab was never disappointed. He used to read this verse:

And that same light glimmers today on the faces of the students gathered here who are the future and hope of our country.

2 responses to “Dr Masuma Hasan: In Memory of the Legendary Fatehyab Ali Khan”